Santa Barbara and her strong devotees.

We came to Cusco last month in the middle of the festival season, a month of parades, concerts, and festivals centered around the Imperial City of the Incas. We arrived in town right before the first major festival of the season: the Festival de Corpus Christi, the major Catholic celebration of the year.

Always taking place on a Thursday 60 days after Easter, the Festival of Corpus Christi marks the occasion when all the Saints and Virgins from all the local churches in the region come to the Cathedral of Cusco, in order to greet the body of Christ.

The day before the festival, the streets of Cusco are filled with marching music as each of the 15 saints and virgins is brought from their local churches to the Cathedral. I have no idea how much these saints weigh, but I do know that each one is borne on something like a litter carried by anywhere from 16-24 grown men. Based on the tremendous exertion evident in these men’s faces and the amount of time it takes to move these life-sized Saints and Virgins through the streets of Cusco (including a LOT of breaks), my guess is that they weigh on average at least 1,000++ pounds each. It takes the better part of a day to move them from their churches to the Cathedral the day before the festival. Each Saint/Virgin is accompanied by a group of devotees from their home church and musicians. Throughout the day, the most famous church bell in all of Peru (& also the largest), María Angola, rings in the tower of the Cathedral, calling the Saints and Virgins to the Cathedral.

The Saints and Virgins spend the night inside the Cathedral and the devotees hold an overnight vigil.

In the morning, the Saints and Virgins are brought just outside the Cathedral doors and everyone comes to get a close look at them as their devotees get them ready for the procession. I have to say that these are some of the most spectacular Saints & Virgins I have ever seen. So detailed and richly decorated, they are spectacular from every angle. Many of them also sit on exquisitely detailed wooden, silver, and gold bases. You can get a closer look at each of them at the end of this post.

We also got to check out La Custodia, the silver chariot which carries the Eucharist, the body of Christ, through the streets to the Cathedral, at the beginning of the parade. La Custodia was built by the Bishop of Serrado in 1726. It is made of sterling silver and supposedly paid for fully out of the Bishop’s own pocket. It was just beautiful in the morning light. La Custodia makes her first appearance of the day outside the Cathedral in the early morning.

A mass is held in the morning, on the steps of the Cathedral so that everyone can participate, surrounded by all the saints and virgins. At 11 am, the parade begins! First, La Custodia arrives, pulled through the streets by many people, bearing the Monstrance. La Custodia passes by us pulled by priests, altar boys, and believers on her way to the steps of the Cathedral.

After La Custodia shows up, one by one, each Saint or Virgin is carried down the slope from the Cathedral to the street and then they each do a lap around the plaza before being taken back to the Cathedral. San Jeronimo making his way over to the slope to come down to the street. Santa Ana makes her way down the steep slope to the street.

This is everyone’s chance to celebrate, dance, sing, pray, and get a closer look at the Saints and Virgins. It takes an average of 1 hour for each of them to complete the circuit, due to having to take breaks from carrying them (to give you an idea, I can walk the same route around the plaza in about 6 minutes). Each Saint/Virgin has a group of men who carry the litter, and many of them also have a frame, carried by younger boys, that they can set the litter on when they need a break. One of the elaborately embroidered banners for San Jose & boys carrying the frame for him to rest upon. One day, these boys will be the men who carry the saint. San Jose and his devotees take a break.

If you’ve never been to a celebration like this before, I can only describe it as controlled chaos. A band starts to play, a Saint or Virgin is picked up by the team and they start a swaying forward and backward dance towards the street. The devotees of that Saint or Virgin wait in the street for them to arrive so they can follow them. There is a calm in the street before the Saint or Virgin arrives as the crowd gathers and swells. Then the Saint or Virgin makes its way down the cobblestone hill into the street and the crowd suddenly has to disperse in order to make room for this heavy load that needs room to move. During the procession, we were standing in the street near the bottom of the hill and there were quite a few times where we were at risk of getting trampled as everyone tried to get out of the way of these swaying Saints/Virgins. San Blas getting ready to make his lap around the plaza. Some of San Blas’ colorful devotees. The Virgen de Belen making her way through the crowd. A marching band leads the way.

After the hard job of bearing the Saint/Virgin down the hill, they usually stop for a break there and everyone rushes in to take photos and make offerings. Then the band begins to play again, the men pick up their heavy and precious load, and they begin the arduous journey around the plaza, accompanied by their patrons and a marching band. They stop every 40 feet or so to take a break. Virgen Purificada, followed by a marching band, makes her way around the plaza. Some of the colorful banners. These are all embroidered totally by hand at Bordados just a few blocks from here. Santiago makes his way, followed by a colorful marching band. Santa Ana and her devotees dressed in a blend of modern clothing and traditional Quechua dress.

After making their way around the plaza, they go back up the hill and back into the Cathedral. The saints/virgins stay there for 7 more days (a period called El Octavo). On the 8th day, the devotees gather again to bring their saint or virgin back to their home church, a journey that will take many of them the better part of the day in this very hilly town. The streets are once again filled with devotees, marching bands, and people. Corpus Christi is officially over.

Here are pictures of each of the Saints and Virgins. Click on each one to see it larger. 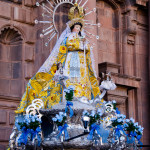 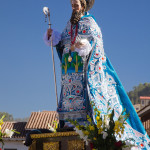 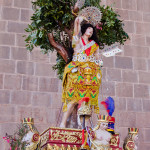 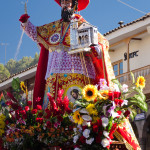 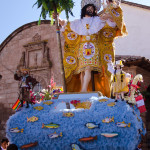 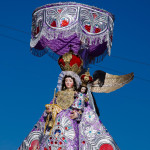 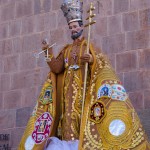 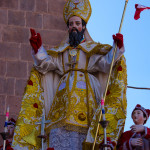 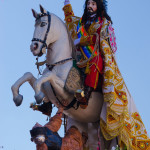 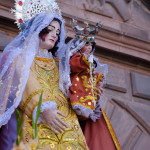 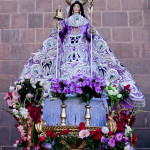 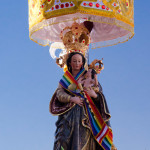 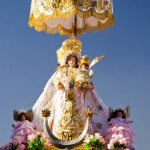 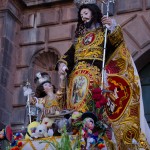 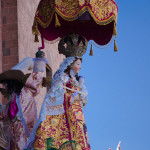 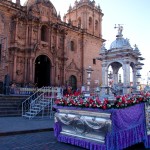 Leave a Reply to Kat and Kyle Cancel reply